THE STATIC ALSO IS ELECTRIC 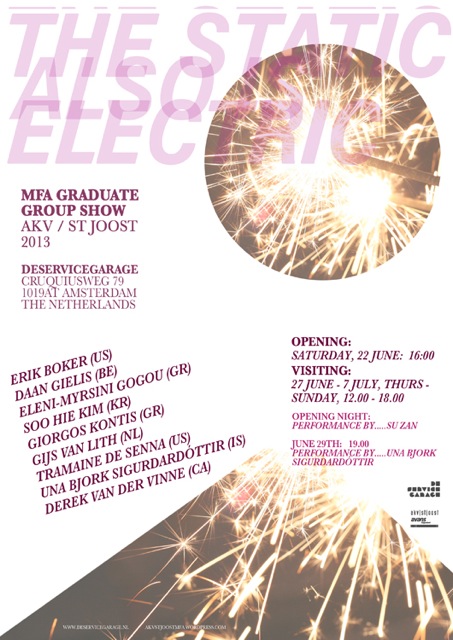 Performance by Una Björk Sigurðardóttir on Saturday, the 29th of June, 19.00

The Static alludes to the net charge of an object, an interference, a random signal, a constant, but simultaneously a thing at rest.  Yet, the charge, the objects, the associations, the visceral impact, like art itself, is alive … Electric.  As in Mark Romanek's cult film of the same name, there can be a puzzling power in that interference, possibly something that reaches to something even higher.

The graduation group show brings together the work of nine artists from The Netherlands, Greece, United States, Belgium, Canada, South Korea, and Iceland.  Visitors will encounter recent works of sculpture, video, painting, installation, and performance, in conversation with one another, and shifting at the mark of the second week.  Like perhaps a slightly bizarre evening gala, one might overhear topics approaching Post-Fordism, techno-Modernism, the nature of the Museum, Hitchcock, authenticity and Cy Twombly, and leopard-skin pants. If lucky, Bob Ross might even stop by.

As in Mark Romanek's cult film of the same name, there can be a puzzling power in that interference, possibly something that reaches to something even higher. http://deshaieselectricalservices.com/

I had heard it played once but couldn't get the name. It haunted my ear drums for years but I was lucky enough to have Lovetron and Luer from Orange County's Funk Freaks ID the track for me. www.birckhead.com

Thanks for writing such a good article, I stumbled onto your blog and read a few post. I like your style of writing 300w acdc adapter power supply

Can i get thumbs up never did? before (please ). … I love this song OMC electric shift outdrive repair

You managed to hit the nail upon the top and also defined out the whole thing without having side effect , people could take a signal. Will likely be back to get more. Thanks
Tangki Panel
Tangki Fiberglass
Jual Septic Tank
Tangki Kimia
Jual Talang Fiber
Jual Rotameter
jual mesin ro
Jual Botol Plastik Agro