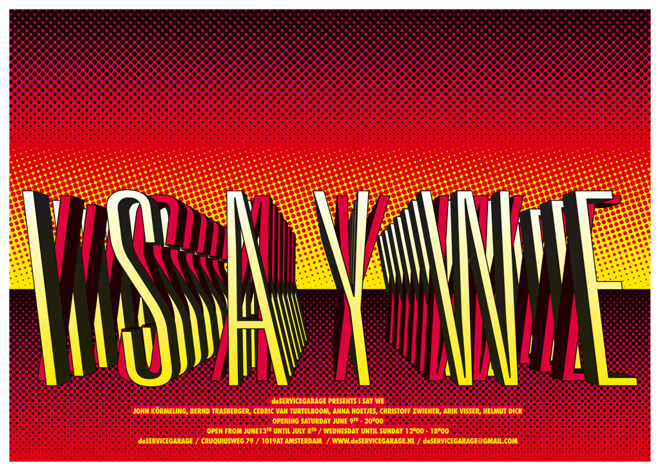 I say We
Instead of asking the obvious stupid question: “Is the idea of communism still valid today and can it still be used as a tool for political practice and analysis?” one should ask the opposite question: “How does our predicament today look from the perspective of the communist idea?”  Zižek in his debate at ‘Marxism 2009’
How do artists work with systems that used to provide an alternative/ for capitalism? This exhibition investigates how certain artists critically reflect on contemporary social and political structures by re-investigating socialist and communist structures in a critical and non-nostalgic way.

Due to the disappearance of communism in central Europe and in the largest parts of Asia, capitalism has lost it’s concrete opponent; another system doesn’t seem realistic. The slogan “develop yourself!” both on a personal and financial level, is embraced almost everywhere. Ideals that are being supported by large groups, or a pre-defined identity to which you belong, seem to be official history in this time of capitalist globalism.

The last years however, it seems that the quest for a shared identity and solidarity is finding its way to the foreground again, both in politics and in society. Large amounts of European inhabitants are being drawn to populist political parties, which are based on emotions and group identities, rather then on administrative reliability. But on the other hand people are occupying the western streets as well in large amounts (inspired by the recent events in the Arab world). In times of economical crisis and political insecurity, it seems that also the capitalist world is capable again of questioning it’s systems as they are and have been; imagining alternative political structures for a different global future.

In a time where collectivity and individualism are engaging in a new problematic and ambivalent relationship, the Service Garage wants to explore how contemporary artists relate to old collective ideals or political tendencies and how they translate this into their work.
Is there a contemporary take on almost lost ideologies like communism and socialism, or are these ideologies out-dated and unchanged?